Testing websites in IE6 on vista and beyond

As a web developer one thing that really becomes frustrating is the lack of consistency in layout rendering across the different web browsers. Each browser has it's quirks but when it comes down to the nitty gritty, Internet Explorer will display it one way and the rest of the browsers will display it another. There are bugs and blatant lack of support of features considered standards throughout internet explorer. The rendering issues are even more problematic when you go back a couple versions in IE. For various reasons a large portion of users still have IE version 6 installed and use it as their primary browser. Therefore we must test websites in all the versions of IE since version 6.

A problem lies there, IE6 is only available on older installations of windows xp. If you have purchased a new computer in the last while or allowed windows update to run you will no longer have IE6 installed. There are workarounds released to get IE6 back in one form or another onto your windows xp installation, however many of these procedures no longer work or are unreliable on windows vista and windows 7.

How do we test in IE6 while working under newer versions of windows? Microsoft released a virtual disk image containing windows xp and IE6 for free download. This means you only need to install virtual pc 2007 and then download the appropriate IE6 disk image. The disk image is quite a large download; after download you then have to let it unpack to get access to the disk image. Unpacking/Installing this disk image also takes quite some time.

After all your efforts you will be able to setup the disk image under virtual pc and get booted into an environment with IE6; all without ever shutting down your current desktop. There is always a catch with these types of things. Microsoft sets the disk image to periodically expire, which will essentially make any data saved while in the disk image unavailable and prevent you from booting the disk image. In order to keep testing sites this way, once your disk image expires you will need to download a fresh copy of the IE6 disk image that will be set to expire at some date in the future and then run through the whole process of unpacking/setting up the virtual pc again.

This can be a source of minor frustration, but this method is one way to know for sure that your site will work in IE6. 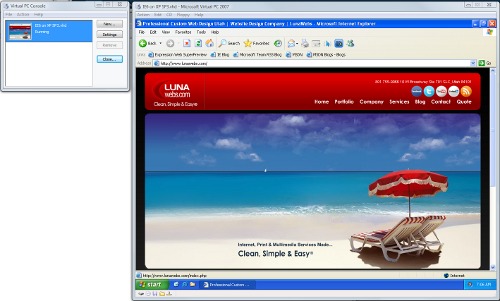 shown above: Lunawebs.com inside Internet Explorer 6 running in virtual machine