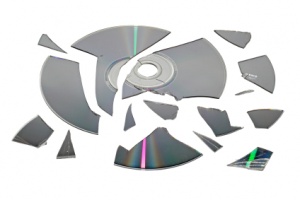 Could the Blu-Ray disk be one of the shortest lived media formats of all time? How much longer will be be using CDs and DVDs? With the recent release of streaming media boxes like Apple TV, Boxee Box and Google TV I have been asking myself these questions.

I have already noticed how little I use the optical drive on my laptop. There are a few cases where someone will bring in a DVD with photos or video, but those are few and far between. I would estimate that I insert a disc into my drive maybe once a month. With increased upload/download speed and free online storage using devices such as DVDs and CDs are becoming more rare to share or archive files. This only makes sense as DVDs and CDs are tangible items that can be damaged or lost. Over a span of 1-2 years floppy discs were rendered near obsolete. Good luck finding a computer with a floppy disc drive. Could optical media be next?

With these questions bouncing around in my head I have decided to wait before I jump on the Blu-Ray train. I have a suspicion that we will continue to migrate our data and entertainment to the realms of remote streaming storage devices. Let me know your thoughts. Do you back Blu-Ray? Are you having a hard time letting go of your DVDs and CDs? Do you still rock out to 8 track tapes?

Mike Vandenberghe
10/12/2010 12:47pm
I think it's on the way out, I barely use any external media besides a thumb drive anymore. Most things I just transfer over a network.

Shad Vick
10/12/2010 9:43pm
I remember telling my wife that we won't see CD's, USB flash drives, etc. in the near future (about 5 years ago). Everything will be a hard drive - little did I realize that hard drive would be on a remote server streaming media over an internet wireless connection. Ah the beauties of technology.