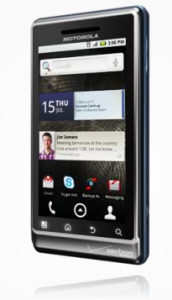 Honestly, when looking for a smart phone, it's always been about the operating system, storage space and speed. The features for which buyers are looking, may be highlighted as ports, screen resolution and the like, but when was the last time Adobe Flash 10 was the main feature of the phone?

Well since the iPhone, iTouch and iPad have been really phenomonal successes, a slight debacle on their part that has allowed marketers behind Google's Android-based phones to gain an edge, is the lack of Adobe Flash.

"Why can't I see Flash on my phone?" You're probably heard it several times. You've almost certainly said it youself at one time or another. You have to admit it's frustrating. The big boys like YouTube and others have solved the problem - but the mainstream has not. Why? Because it's too expensive.

Websites or parts of websites have been programed using conveniences of flash, never anticipating the growth of Apple's mobile devices to take over so much of the market share. While the success of iPhone is undeniable, the lack of flash is proving to be the device's biggest downfall while providing a golden opportunity for the marketers behind other smartphones, such as Android OS on Motorola and HTC phones.

Just take a look at the advertising of the Droid 2 by Motorola and you'll get my drift.  Right at the top: comes with "Flash"...