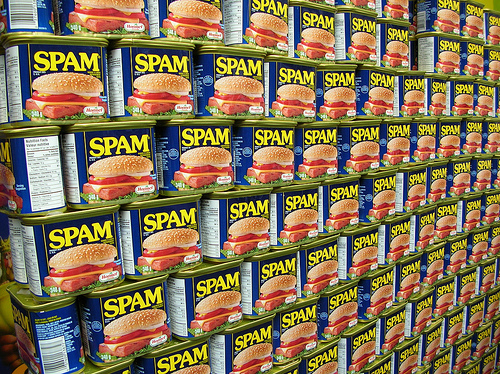 Spam originally referred to posting the same message over and over again. For example, if you joined a chat room and filled it with the same words over and over, you were spamming for the sake of ruining the chat room. As email became more common, the phrase was quickly applied to unwanted email that filled up your inbox; the concept was very similar, but applied to an email inbox rather than a chat window.

Today, though, spam has a different meaning. Spam, to most, is any unwanted promotional material. The more intrusive your call to action, the more likely it is to be labeled spam. Even having multiple buttons that stand out too much can be seen as spam to a generation that has become very sensitive to pushy online marketing tactics. In the SEO world, spam is becoming a broader term, too: anything done for the sake of search engines that hurts the user experience is considered by many to be spam.

Article marketing was once a legitimate tactic. People actually read article directories to find information! In those days, search engines were still very rough, and they had a hard time classifying information and associating it with a keyword. People would go to article directories because it classified information in a way that was useful. The articles were, generally, much more useful than the average article you'll find today.

Today, there aren't may people who go to article sites to find information. As people moved online and search engines improved, people stopped going to article sites directly, and instead began landing on them from search engines. It was around this time that you saw the rise of the generic article - content that no one wanted to read. These articles were built solely for the purpose of improving PageRank and increasing a site's rankings.

Interestingly, the fact that article directories worked for so long points out one of the problems that search engines are struggling to solve: how do you grade a link five years later? In some cases, that link may still be an endorsement, but in many cases the link is dusty and forgotten. Still, the link infastructure to article directories exists, and the links pointing to those linking pages still exist, with most of their former authority still in tact. While the solution is complex, we've seen changes indicating that Google and Bing are both aware of the problem, and working on better understanding the "meaning" of a link.

Things began to change a few years ago as Google and other search engines began to get smarter. Posting the same article 300+ times had previously been a sure-fire way to rank for your keyword, but the efficacy seemed to decline with each Google update. Some SEO firms continued to cling to article directories: they were easy, and they still worked.. sort of.

Then one day along came the Panda update. Article directories were knocked on their backs as Google began cracking down on articles that were, by any standard, useless for users. Sites with links from article directories saw minor drops, too, but it was mostly the content hoarders and content farms that felt their business model crumbling. For SEOs and site owners who gathered spammy links, it felt like a warning shot: stop posting useless content. We know about it.

Article marketing is about one update away from becoming extinct, along with article spinning and useless blog posts. I'm looking at you, blogs with no author, vague subject matter, and poorly-written inconsistent posts. Your days are numbered.

Just as email filters have made email spam a thing of the past (really, do you remember how bad it got), search engines are nearing the end of one battle in a war they're almost sure to win. The articles that no one wants, like the emails that no one reads, will soon count for nothing. It's time to get on board with the future of SEO and SEM: creating and promoting things that people will actually care about.