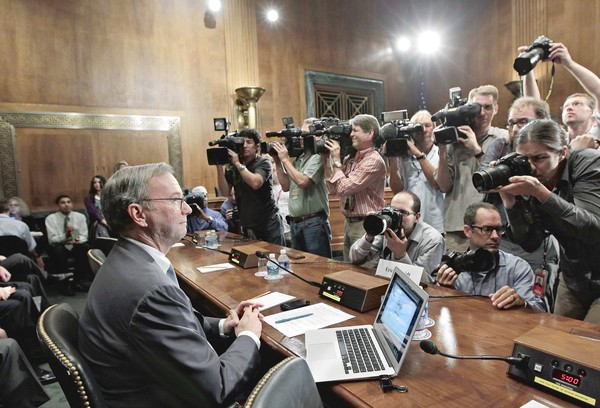 Watching Google's Eric Schmidt testify before the Senate's was like watching a slightly awkward physicist attempting to explain quantum theory to a bunch of gorillas. Utah's own Mike Lee showed that he is worse at understanding the issues involved than Eric Schmidt is at explaining them. Meanwhile, Danny Sullivan nearly had a stroke listening to the Senators grandstanding as trust-busters, all while blatantly requesting favors from Google.

For those who aren't familiar with the case, a number of smaller companies, such as Yelp, have complained that Google is unfairly displaying their own results (like Google Maps, Places, and Products) to the detriment of consumers and small businesses who compete with Google in these areas. The result is a hearing where a bunch of senators have the opportunity to show off their power, and, inadvertently, their own ignorance of how search engines work.

Let's just pretend that anyone would know about Yelp without Google's help, and assume that Yelp's claim is valid - that is, that Google is ranking their own properties unnaturally high. What are the possible outcomes?

Google could be forced to stop showing things like Maps or Products, or forced to show them less prominently. Contrary to the purpose of anti-trust laws, Google would then be placed at a competitive disadvantage through legislative means. Bing and Yahoo still have product and maps searches. Is it really fair to tell Google they can't do what their competitors do, simply because more people use their search engine? If all search engines are forced to stop displaying results, there is only one clear loser: the consumer.

The senators can be forgiven for their lack of understanding on the finer points of search engines and how search results are ranked; what concerns me is the complete lack of understanding on the broader issue at hand: when should a company be considered a harmful monopoly? Anti-trust regulation was designed to prevent a single, dominant provider of a product or service from charging whatever they wanted. Standard Oil, for example, was split under the (arguable) justification that the company had the power to charge whatever it wanted for oil.

In the world of search engines, no such power exists or could exist. Google's market strength is in their brand name, user loyalty, and quality search results. Google is not, and cannot, prevent users from typing in Yelp.com or Bing.com. If users wanted to use these services, there's nothing stopping them.

Perhaps an analogy will put us on the same page: Google owns a shopping center that is visited far more often than their competitors' shopping centers. The majority of the market is free to whoever they think deserves to set up in their market, while a less-visited portion of the market space is paid for. Google also owns some kiosks, but none of these generate direct sales. Rather, they're like customer service kiosks that compare prices and list products, directing visitors to other shops for convenience. They also make some money by advertising other stores on the walls. The customer service kiosk has a bigger sign than most shops. Oh, and if people don't like the way Google does things, they can instantly teleport to competing markets - for free. In this analogy, the government is unhappy with Google's customer service kiosk - one of the most popular, time-saving features in Google's market - exactly because it's so much more popular and complete than one of the stores in Google's market (Yelp.com) trying to do the same thing.

The unfixable and undeniable fact is that people think Google does it better. We cannot simply pass laws to make the market leader less competitive, nor can we make people use a service they perceive as sub-standard.

Disclosure: I am not affiliated with Google in any way, and have no strong feelings for or against the company. If Bing wins a majority of the market, my job changes very little. I am, however, biased towards a free market.

Shad Vick
09/23/2011 4:25pm
Once again Government trying to regulate everything. I don't know what the political affiliations Yelp executives have, but they are obviously against a free market. I think more so however that too many legislators are naive to how search engines work. You see google doesn't just pop up in your browser - you have to direct it there by setting up FireFox, Safari, IE or whatever to use it...or you have to type in "www.google.com" to search it. You see the consumer has a choice whether to use that product and if they CHOOSE to use Google then no one is forcing anything upon them. As a side note Google can display anything they want and in the order they want. That's called freedom. If this freedom is taken away - we're going to loose a lot in the industry in terms of value added search.