Are you going on strike Jan. 18th? 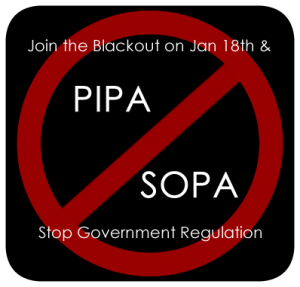 January 18th, 2012 website owners all over the world will be going on strike to oppose legislation against web censorship.

Yes - once again the government is trying to get a little piece of control of something they need to keep their sneaky hands out of.

I've seen this before.  A "little" regulation with a "few" postive factors turns into control later. Just think of the tax code, EPA and many other ideas that have become bloated over the years.

At first glance,  the Bill in the house called "SOPA" Stop Online Piracy Act and "PIPA" Protect IP Act may seem beneficial from their titles. In reality, however there are all kinds of implications to businesses if the bill is passed.  Freedoms taken away that could hurt innovation, stifle production and put chains around technology companies.  Once again - regulation and unnecessary control which will drive litigous organizations to the court house. Brett Greene at Huffington explained this well.

We'll (Luna) be going on strike and taking out website at least partially down that day. We're also offering for free to our customers to display a placeholder website protesting the bill for 24 hours.

Hopefully if enough voices speak up - the senate and house will listen and nix the bill.

If you'd like to put a badge on your website instead of taking it down altogether feel free.

Alternatively if you'd like a placeholder website for the day - let us know and we'll give you the code free of charge.