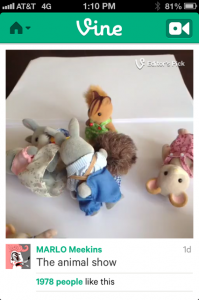 The launch of Twitter's new brainchild, Vine, is already coming under fire thanks to users who've adopted the app as a way to post pornography. Although users have the option to report content they feel is in appropriate, that does little to negate the problem.

While Vine says it will remove videos that violate their Terms of Service, a quick browse and keyword search shows that there's no mention of nudity or pornography being against acceptable use. The developers have said that those videos that have been flagged will be placed behind a filter stating a user may find inappropriate content if they continue, but according to ABC News, the filter it hit and miss.

Apple has been very strict about the standards put in place in order to safeguard against inappropriate images and material, even pulling a new photosharing app this past week after consumer complaints. Interestingly, they've declined to comment on Vine, which for better or worse, received Apple's Editor's Choice Award... They may have quietly pulled that glowing endorsement, but is there even anything to say other than, 'Yikes!' and 'Can this mess really get any worse?!'

Nail In the Coffin

Just when you thought it couldn't get worse (I mean, really?) it does.

An explicit video ended up as the 'Editor's Choice' in the app early this morning, causing Twitter to release a statement apologizing for 'human error'. The full statement issued by Twitter reads:

"A human error resulted in a video with adult content becoming one of the videos in Editor's Picks, and upon realizing this mistake we removed the video immediately. We apologize to our users for the error."

Since the internet became an integral part of life, pornography and the limiting of inappropriate content is one giant battle in keeping websites and now mobile apps, in the G-rated category. Flickr is an example of a photo sharing service that's managed to do reasonably well at filtering inappropriate content. And that's what's truly mind blowing; Vine's developers seemed to forget about the problems of those services preceding them. I mean, Viddy! aka Vine before Vine, met its demise for the same thing. Given the long history and knowing that inappropriate content looms large on the net, this whole snafu makes virtually no sense at all.

While PR teams are presumably in full panic mode and determining how best to spin the mess and do some desperately needed damage control, it brings up a variety of issues and questions pertaining to what role technology companies play in all of this. While it should go without saying that this is a reminder for parents to closely monitor the content being accessed by their children, is it really that simple? Do companies also have a responsibility to do their part to combat the problem of inappropriate content?

Vine's fate will be revealed in time, but for now, it looks like we're left with more questions than answers. For now, perhaps the only thing left to say is simply, no comment...