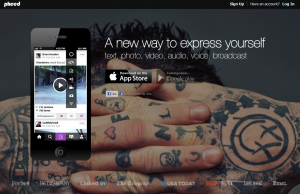 Are you hungry for a social media platform that doesn't involve the words twit or face? If Apple's list of Top Free apps is any indication, the answer is a resounding, YES. New app kid on the block, Pheed, has jumped to Apple's #1 most downloaded social app, #5 overall.

Pheeding the (Over) Crowded Social Net

Pheed entered the social media sphere late last year to a lukewarm reception. After all, it's hard enough to keep up with Twitter, Facebook, Instagram, Tumblr, and now, Vine. It had all the makings of a failure because let's face it... how many apps can one use?

Four months, 30 countries, and over a million users later, Pheed appears to be getting the last laugh.

Teenagers. Creatives. Filmmakers... Oh, you mean, what is its purpose?

Well... that's the thing... take Twitter, YouTube, Fac— Oh, just take all of the popular social media platforms and for all intents and purposes, you've got Pheed.

With all of the recent controversy over Instagram, Facebook, and whether online content is really your own, Pheed has nipped that guessing game in the bud.

Post your photos. Post up to four hours of video... yet, unlike those other social media sites, Pheed offers one potentially priceless feature: monetization.

For just under $2 up to $34.99, users can charge those interested in viewing their content. Costs are either done via pay per-view or a monthly subscription cost. Although Pheed does receive half of the revenue in order to cover their bandwidth, storage, and payment processing costs, the rest is all yours. Better yet, there's no ambiguity about who owns your content. You do; end of story.

Whether Pheed is here to stay is up for debate. It's a great idea in theory, however, sustainability for pay per-view or subscriptions may be the part that makes or breaks its success. After all, with users long having had access to celebrity generated content on social media for free, are they really going to start paying up now?

Do you have a Pheed? We'd love it see what you guys are going. See that comment box below? Talk to us!