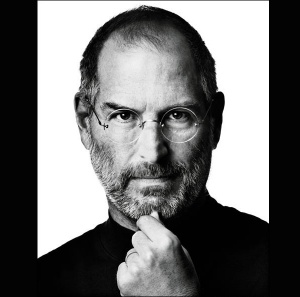 Steve Jobs wasn’t a fan of overt, ‘branding’ and ‘marketing’. ‘Dirty’ is how he described the two words, preferring instead to focus on educating his audience, providing them with value. Some will argue it’s semantics at best —and it is, at least on some level. Regardless, it’s a rather ironic twist of fate that in the end, Jobs and the icon company he lead and co-founded have come to be known, respectively, as being some of the great marketing geniuses of our time.

There’s no doubt that there is much inspiration, plenty of knowledge to gain surrounding both the man (and the myth) that was Steve Jobs. Yet with every new Jobs article, when I glimpse at the photographs showing current Apple CEO, Tim Cook, outfitted in Steve’s trademark black shirt and jeans, it’s this bit of copy my mind recalls without fail:

Here's to the crazy ones. The misfits. The rebels. The troublemakers. The round pegs in the square holes. The ones who see things differently. They're not fond of rules. And they have no respect for the status quo. You can quote them, disagree with them, glorify or vilify them. About the only thing you can't do is ignore them. Because they change things. They push the human race forward. And while some may see them as the crazy ones, we see genius. Because the people who are crazy enough to think they can change the world, are the ones who do.

It’s brilliant copy; its message strong. There’s no question it’s made a lasting impact. Yet the question must be asked: Why are ‘we’ as individuals and brands obsessed with being ‘the next Steve Jobs’ or ‘the next Apple’?

Again, perhaps we’re arguing semantics. We claim to crave innovation, to value creativity and to want to change the world. Is it genuine or do we merely value the idea? Is our driving force really innovation and individuality as opposed to ego?

What I really want to say is simply this:

Stop trying to be Steve Jobs.

You’re were not, are not and will never be, the man who spawned a generation of Apple fan boys and the tablet computer whose release garnered lines of perspective owners that spanned 3+ city blocks in downtown San Francisco.

The unknown symbolizes beauty. Creativity. A new generation of innovators who aren’t satisfied with the status quo.

Let us never forget history and its crazy geniuses who ‘pushed the human race forward,’ but that doesn’t translate to ‘hey, let’s strive to become them.’

When we recognize that fame isn’t, or sadly shouldn’t, be the name of the game, perhaps it will also be the moment that the world, however unintentionally, is to learn your name.