When the world's biggest company came under fire in search engines, Walmart did what most mammoth corporations would do: absolutely nothing. Walmart has taken and dodged its fair share of PR attacks in the past, ranging from labor disputes to anger about oversea's suppliers, but they had always emerged with nothing more than a few scratches. When it came to a search engine smear campaign, however, the company continues to fumble clumsily.

The front page of Google is currently plastered with anti-Walmart sentiment: one page mocks "the people of Walmart," another attacks the company for fighting unionization, while another criticizes the company for low wages, supplier relations, and a host of other topics. 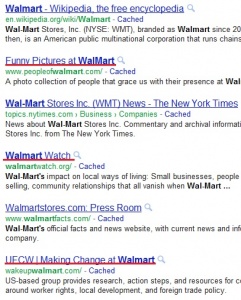 Again, all three of these results are on the first page. This case shows how one company became exposed in search engines, suffering a daily smear campaign whenever someone types the Walmart brand name into search engines. It is estimated there are a minimum of 16-30 million impressions of the harmful sites on Google every month.

What could Walmart have done? Quite a bit, actually. First, the company could have taken preemptive measures by locking down the first 10 spots with positive pages. By solidifying their current rankings, Walmart could have significantly reduced their exposure.

Walmart should also have begun SEO reputation management immediately. The longer that the page appears on page one, the more traffic it will attract. Increased traffic leads to a more solid position through additional coverage and more links. Even today, Walmart could knock these negative reviews off of the first page if they were willing to invest in proper SEO reputation management services. They would also have been wise to learn their lesson and purchase domains like peopleofsamsclub.com.

To prevent your company from becoming a target of a smear campaign, or for help in removing negative press, please contact us for a quote.

"Walmart did what most mammoth corporations would do: absolutely nothing."